At the end of the Middle Ages, there was a municipal bog at Pööl, where the cattle could be watered. In the immediate vicinity, in a field named “Auf der Klapper”, were the huts of people who were infected with contagious diseases. If villagers approached the huts, these people were required to make their presence known by making noise with a clapper.

The old Roman road which passed by this location was also called “Alte Hill” (sunken road). Here at Hillenpütz there was originally a water mill, the Helingsmühle, also referred to as the “old mill”. In a few metres, this trail reaches the Eifel National Park, crosses the Helingsbach stream via a new wooden bridge, and finally arrives at the hill on the opposite side, the Walberhof.

Walberhof was the location of the first chapel consecrated in the area of the present-day town of Schleiden. In the era of the Dreiborn criminal court, it was also the site of the gallows for condemned people. Later Walberhof was developed into a small military airport, which at that time pertained to the neighbouring Nazi estate, “Ordensburg Vogelsang”. Today Walberhof has lost its former importance, and a parking area for hikers is located at this historic site. 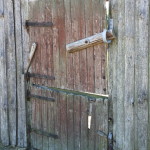 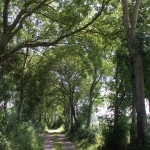 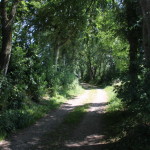