In 1889, savings of almost 42,000 Goldmarks were available, real estate matters had been arranged and the church council felt that their capital was sufficient to begin building a new church at the Kreng location. The church was consecrated in 1894. The church tower is 48 m high, and the church has room for 500 people.

However, at the time of the First World War in 1914-18, cannons were considered to be more important than the church bells, which were taken for wartime purposes. In 1945, for days the church became a place of refuge for the population. The people gathered in the middle of the church, warming themselves at an open fire, which they sustained by burning the wooden church benches one by one.

In 1950, wartime damage had partially been alleviated and four new bells were consecrated. In the 1970s, in accordance with new liturgical regulations, the church was remodelled and the main altar, three side altars, the Communion rail, the pulpit, the confessional and the stationsof the cross were removed. In 1994, on the occasion of its 100th anniversary, the church was extensively renovated. 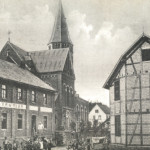 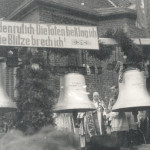 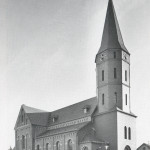 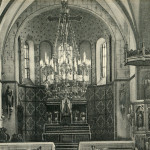