For centuries, the chapel of St. Nicholas was the daughter-church of Olef. On Sundays, the parish priest was required to preach the Word of God in accordance with the requirements of the industrial area that Gemünd was at that time.

As a result of the radical changes brought about by the French emperor, Napoleon, Gemünd was raised to the status of a cantonal parish.

The rise in population, especially through the industrial development in Gemünd, meant that the church became too small. The efficient and prudent priest, Hermann Joseph Dapper, together with the community, was able to build a new church in the Neo-Gothic style: it was dedicated in 1862.

As a result of wars and conflicts, renovation and rebuilding have resulted in the loss of much of the original interior. 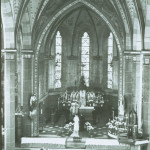 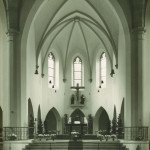 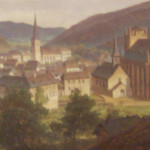