The statue of St. Nepomuk is one of the features of Gemünd. When the new Jülich Bridge was built, Baroness Franziska von Harff, the lady of the Dreiborn estates, donated this statue and had it set up in the middle of the bridge. When the bridge was later widened, the statue was moved to its present position. The inscription on the plinth is a Chronodistichon, a couplet in which Roman numerals appear as capital letters giving 1738 as the year it was set up:

„He who stands here, mutilated, was in earlier times a more beautiful figure.

He will be your protector when your good reputation is ruined“.

Perhaps in the past, the figure was set up in an entirely different place before it ended up in its present position, and that gives rise to a puzzle:

– who was the artist who created the figure;

– where did it previously stand;

– who wrote the elaborate couplet; 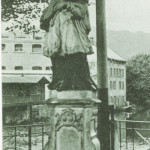