After the coming of the Counter-Reformation to the estates of Schleiden in 1619, many inhabitants left the fortifi ed town and were able to settle in Gemünd on the right hand side of the Urft which belonged to the Jülich authorities in Heimbach. Here, as leading citizens, they hoped to be able to practise their religious observances undisturbed.

Among the new Gemünd citizens were Reinhard Dietrich Günther and his wife Elsgen Jonen. They built this splendid stone house; their initials, along with their crest and the year, decorate the archway. Dietrich got into a dispute with the lord of Dreiborn, which was taken to the Reichskammer Court in Worms, the highest court in the German realm.

The story has it, however, that Dietrich defended himself against the nobleman not only with words and in writing but also with the threat of weapons, hence the name of the house „Trutzburg“ – a castle or fortifi cation built to lay siege to another. 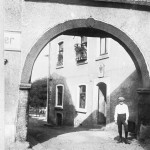 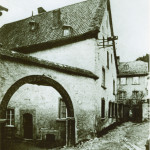