At the roundabout joining the B 258 and the B 265 stands an eye-catching historic building, unaltered since 1835 when it was built in classical style by the architect Christian Wilhelm Ulich. It is the former finance office for the estates of the dukes of Arenberg, from which the magnates‘ lands were managed. It was known popularly as „The Bursary“.

The bursar lived at the top, and on the ground floor were the offices. There, for example, rents and wages were paid and other transactions carried out.

It was later developed as a restaurant. 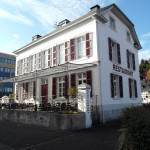