Council offices for the county of Schleiden

When Schleiden was designated a county town in 1829 the council offices occupied this site and then from 1895 to 1915 moved into a building opposite the old bursary. The living quarters of the council leader were moved next door into a building surrounded by iron railings.

In the background the former Protestant parish house can be seen; on the right is the impressive entrance to the first Schleiden hospital which was later moved to another site. The little square adjoining this building was known at the time as „Arenbergplatz“.

After 1915, the former council office served as living and business accommodation. After the demolition of these offices, a regional bank built its headquarters here in 1980’s style. Magnificent new premises for the Prussian local government offices were built on the south-eastern side of the valley. 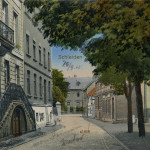