Count Dietrich IV. of Manderscheid-Schleiden (known as „The Wise“) had this building erected originally as an alms house. It was frequently modified and after the town fire of 1603 it was totally rebuilt. In 1854 Duchess Ludmilla of Arenberg donated the building to be used as a hospital, and the Arenberg coat-of-arms was emblazoned over the main entrance.

According to the founding charter of the hospital „sixteen poor people of the former county, regardless of religious denomination, should be cared for without charge“. This predecessor of the later Schleiden hospital was served by sisters of the Congregation of St. Borromäus.

During the First World War, it was used as a military hospital, and later as a needlework school, an X-ray centre and as a convalescent home. It is currently used for purposes connected with the church. 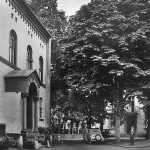 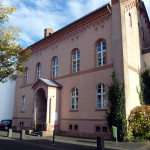