From the Reformation on, religious practice in the area was totally in accordance with the religious affiliation of the ruling families. This led to the founding of a Protestant community which after the Counter-Reformation continued to practise its faith as a minority in an overwhelmingly-Catholic region.

From 1660, the Schleiden Protestants had their own cemetery outside the town walls at Driesch. The eventual permission to build a church there also was given in 1785; however the community was allowed to build only a prayer house without a tower or bells and without an entrance from the street. The tower was eventually built about 50 years later based on plans by Christian Wilhelm Ulich.

From 1895, the community had its own parish house on the opposite side of the road, on the other side of the present-day roundabout. This was demolished in 1955 to allow the reconstruction of the junction of the B 258 and the B 265. An iron cross in the wall of the Protestant cemetery commemorates the history of Driesch as a tournament field. In 1360 two jousting combatants died here in a tournament, Gerhard von Jülich, Count of Berg and Arnold II, Count of Blankenheim. 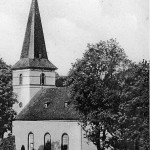