From 1884 the 18-kilometer railway link between Kall and Hellenthal served as a branch line to the Cologne-Trier route. Offices and businesses now stand on the site of the former station. But the railway came much too late for the once-booming iron industry which had been for decades demanding a railway.

Initially, the station stood on the outskirts of the town, which expanded rapidly in the first decade of the 20th century. The lines and the station were severely damaged in the last few months of the Second World War. On the 8th July 1948 the people of Schleiden were delighted to welcome again the first train from Kall. For years the local population had sorely missed their „Flitsch“ – the popular name for the little railway.

Until the 1970s the „Oleftalbahn“ (Olef Valley Railway) was the backbone of passenger and goods traffic along the valley. The increasing use of motor vehicles made the railway largely unprofitable and from the 1980s rail traffic generally ceased. Since that time there have been attempts to revive rail transport. At present on Sundays and public holidays, a railcar runs as a tourist attraction; however the aim is the reintroduction of a regular service. 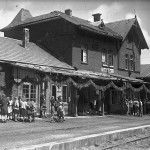