In medieval times, the houses in Schleiden, as in the region generally, were half-timbered, roofed normally with straw or shingles. Furthermore, there were countless wooden stables and barns in the town. Every spark could cause a catastrophe. A disastrous fire in 1603, ignited in the marketplace by the metalworkers’ leftover charcoal, reduced almost the entire town centre to ashes, leaving about 600 people homeless.

In churches throughout the country donations were collected for the victims of the fire in Schleiden. There were further disastrous fires, as in 1897 when 12 houses and three stables were destroyed (see picture of the fire site). The oldest remaining buildings in the town, apart from the castle and its church, are two half-timbered houses, which were built in 1605 after the great fire. One of these is „Am Markt 26“ over whose main door the building year is still to be seen. The other, which has been splendidly restored, stands at the foot of the castle hill on the corner of „Am Markt 9“ and „Wolfsgasse“. 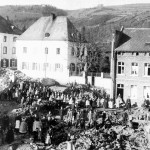 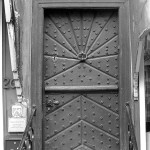