At the beginning of the 20th century, so-called war memorials stood in nearly every area of the Eifel region. The motivating force for these was generally the nationalistic combatants’ associations.

Schleiden also erected a war memorial at the foot of the castle hill commemorating the local victims of World War I. This served less as a focus of grief for the victims but more for the glorification of war.

The sculpture at the centre of the memorial depicts a reclining stone lion: the names of the fallen are engraved on the base. At the end of the 1950’s it was taken down, and replaced by a more up-to-date memorial designed by Paul Gerhard Bertrams. With its interwoven iron crosses, this memorial commemorates also the victims of World War II. 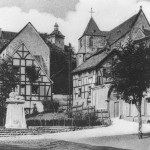