Around 1900, at the junction of „Im Burggarten“ and the present Sturmius Bridge, mayor’s offices were built in Baroque style, and were considered amongst the most attractive council buildings in the Prussian Rhine Province (picture left).

The area in front „Amtmannspesch“, for many years the bleaching ground for the Schleiden washerwomen, was turned into a well-kept spa garden.

The town hall was destroyed by the end of the war. On the other side of the road, a new town hall was built in the 1950s and used until 1972 (picture right).

In 1973 the town council moved into the offices of the former state administration at „Ruppenberg“. The old town hall was sold for private use. 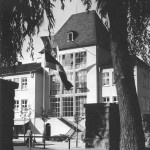