The schools in Schleiden have regional significance. The origins go back to a high school built in 1865 on „Driesch“ right next to the Olef. This evolved into the grammar school into which the old school was integrated during the impressive new building programme in 1926-1929.

Next to the school was a sports hall on whose Olef side was a fire station with a high tower for drying the fire hoses. By the end of the war, the school was completely destroyed, whereas the sports hall survived with barely a scratch. After the war, it was used as a cinema until it burnt down in 1982. Today just the fire tower remains. The open space was renamed “Pont-l’Abbé-Platz” and the coats of arms of Pont-l’Abbé (Brittany) and Schleiden embellish the front of the tower, in commemoration of the twinning of the two towns in 1978.

The town grammar school complete with sports hall and other facilities, was rebuilt from 1949 on. 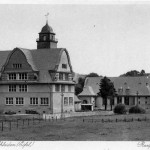