In 1930, the former „Hühnerstraße“ (Chicken Street) was renamed as „Sleidanusstraße“.

Apart from the slightly-disparaging associations with the old name, the purpose behind it was to commemorate one of the most famous Schleiden citizens: Johannes Sleidanus, born in 1506 in Schleiden as Johannes Philippi, and died in 1556 in Strasbourg as Johannes Sleidanus (the man from Schleiden). He was a diplomat and a historian of the Reformation movement.

„Hühnerstraße“, with its half-timbered frontages, encapsulated for a long time a piece of old Schleiden. Here an exemplary co-operation prevailed between the different religious groups: the houses of Catholic families stood next to the Jewish butchers, Rosenbaum, and the Protestant parish house and school, and there was a good community spirit.

By the end of the World War II, the buildings in „Sleidanusstraße“ were largely destroyed. 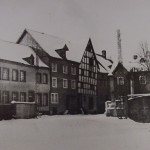